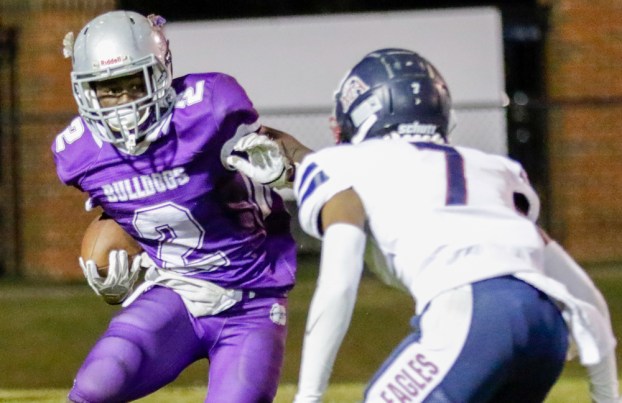 The Pike County Bulldogs saw their 2020 football season come to a close Friday night when they fell to Montgomery Academy 28-6 in the second round of the Alabama Class 3A State Playoffs in Brundidge.

After scoring 21 first half points, the Eagles put the Bulldogs away with one final score in the fourth quarter.

“They (Montgomery Academy) played a lot better than we did,” head coach Fred Holland said. “They did a good job of executing their plays, and we just got outplayed tonight. But it was not all bad. Some of the things we did were pretty good, but they did a better job than we did offensively and defensively. I cannot take anything away from them. They are a very good team.”

The Eagles scored on all but one of their first half possessions on Friday night, starting with their first one. On the 14th play of the opening drive, Jashawn Cooper rumbled his way in fore a six-yard touchdown.

The Bulldogs answered immediately on their opening drive of the contest when Kahriyus Pennington took a handoff eight yards for the score. The Bulldogs missed the extra point, brining the score to 7-6 in favor the Eagles with 2:40 remaining in the first quarter.

Quarterback Kohn Britton did damage with his legs all evening long and early in the second quarter he stretched his team’s lead with a touchdown run of his own. After a successful extra point, the Eagles lead grew to eight at 14-6.

Following a three-and-out by the Patriot offense, the Eagles had their second double-digit drive of the half, a drive that ended with a three-yard touchdown run by Carter Wallis. The Eagles went into halftime leading 21-6.

The Eagles scored their final touchdown with 10:34 remaining in the contest. Coach Holland and his staff saw 10 seniors play their last game in Bulldog Stadium Friday evening, and he was proud of what they have accomplished not only in the last four years, but especially in leading this team during this unusual season marked by Covid.

“I’m extremely proud of those guys and everything they went through this year, and to accomplish some of the things that they did,” said Coach Holland. “I know we came up on the short end tonight, but I believe they played pretty good during the course of the season, and I cannot say enough of how proud I am of them, and our coaches, for what they did this year.”

The Pike Liberal Arts Patriots scored 21 unanswered points in the second half on Friday night to secure a 35-15... read more