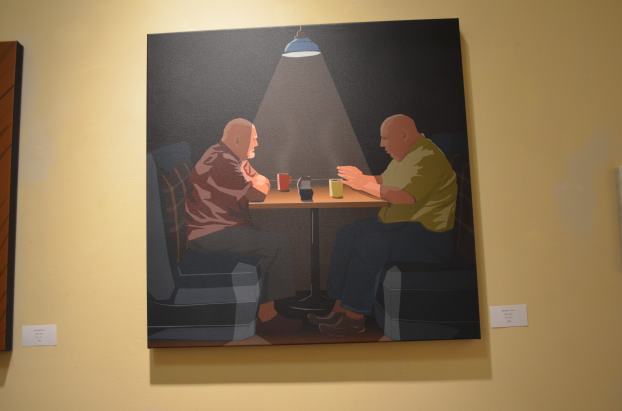 Photographer Bob Corley’s digital artwork is on display now at the Johnson Center for the Arts. Corley will be the guest at an artist’s reception and talk this Thursday.

The Johnson Center for the Arts will host an artist’s reception for photographer and Troy native Bob Corley from 6 until 8 p.m. Thursday. The public is invited to view Corley’s “Beyond the Photograph” exhibition and to learn more about “digital photography” during the Artist’s Talk.”

Masks and social distancing are required. Light refreshments will be served.

Brenda Campbell, JCA director, said the JCA is excited and honored to welcome a homegrown artist to the Johnson Center.

“Bob is the son of the late Louis and Lorraine Corley and his brother Buck and his wife, Jane, live here,” Campbell said.

An interesting footnote to Bob Corley is that his dad was the City of Troy post master and retired from the building that now houses the Johnson Center for the Arts.

So, the artist’s reception for Bob Corley will be a “home coming” in two different ways.

Campbell said Corley’s “Beyond the Photograph” features 15 pieces of his artwork in the Kirk Gallery. The exhibit offers a captivating look at photography as the artist sees it in the digital age.

“Bob’s work is very personal,” Campbell said. “He captures people and places that are important to him. His wife is of Greek ancestry and one of his images includes her family and also images of her ancestors.”

“Photography has been recognized as fine art for more than a century,” Corley said. “The introduction of digital cameras and editing software had an impact similar to the introduction of color film and smaller cameras, opening up a new world for photographers limited only by their imagination.”

Capturing an image is merely a starting point on a journey of exploration to look beyond the photograph, Corley said.

“A digital camera is my sketch book, a computer and editing software,are my canvas and paints.”

The images that Corley captures and then “digitally paints” range from two men at breakfast in a Fairhope café, to rush hour pedestrian traffic to oranges, strawberries and window shutters.

Corley’s work has been shown in juried shows and galleries in Montgomery, Auburn, Clanton and Atlanta. Most recently, several of his digital paintings were exhibited at the Photographic Days of Selma, an international celebration of photography.

The public is invited to view his work at the artist’s reception from 6 until 8 p.m. Thursday at the Johnson Center for the Arts.