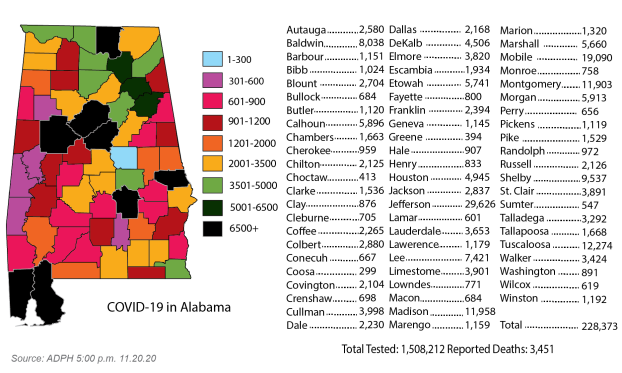 The surging coronavirus is taking an increasingly dire toll across the U.S. just as a vaccine appears close at hand, with the country now averaging over 1,300 COVID-19 deaths per day — the highest level since the calamitous spring in and around New York City.

The overall U.S. death toll has reached about 254,000, by far the most in the world. Confirmed infections have eclipsed more than 11.8 million, after the biggest one-day gain on record Thursday — almost 188,000. And the number of people in the hospital with COVID-19 hit another all-time high at more than 80,000.

With health experts deeply afraid Thanksgiving travel and holiday gatherings next week will fuel the spread of the virus, many states and cities are imposing near-lockdowns or other restrictions.  Alabama added 2,463 new cases on Friday, bringing state total to 228,373 since March. Hospitalizations rose to 1,315 and the Alabama Department of Public Health reported 90,702 presumed recoveries. Pike County added nine new cases on Friday, brining totals to 1,529 with 14 confirmed deaths. Troy University added four student cases and three employee cases, all in the north end zone.

COVID-19 deaths in the U.S. are at their highest level since late May, when the Northeast was emerging from the first wave of the crisis. They peaked at about 2,200 a day in late April, when New York City was the epicenter and bodies were being loaded onto refrigerated trucks by forklift.

Among the newly infected was President Donald Trump’s eldest son, Donald Trump Jr., who a spokesman said Friday has no symptoms and has been quarantining since learning of his diagnosis earlier this week.

Amid the bleak new statistics, Pfizer said Friday it is asking U.S. regulators to allow emergency use of its COVID-19 vaccine, setting in motion a process that could make the first, limited shots available as early as next month, with health care workers and other high-risk groups likely to get priority.

But it could take months before the vaccine becomes widely available. Pfizer has said the vaccine appears 95% effective at preventing the disease.

Who did that? People around Troy are asking and the answer was not readily forthcoming. However, the tourism office in... read more