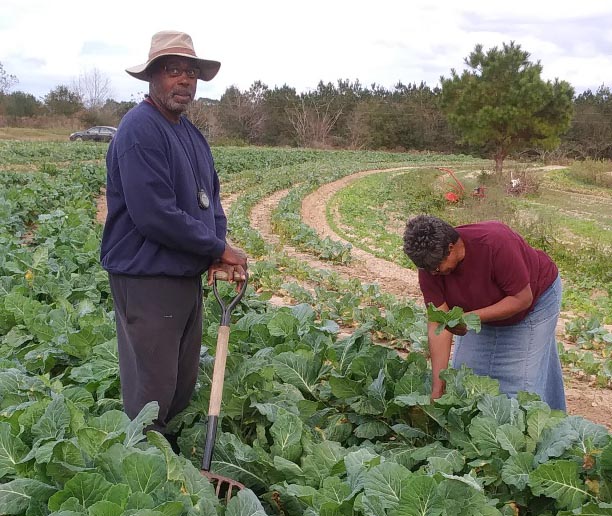 Robert Boyd’s turnip greens and collard greens are a staple at the annual Community Thanksgiving Event in Brundidge. Boyd’s gardening talents have helped feed thousands of people over the years.

When Robert Boyd thinks Thanksgiving, he thinks, first, of his many blessings and then his thoughts turn to the gathering of the greens.

For more years than he can remember, Boyd has been gathering turnips and collards for the community Thanksgiving dinner that is hosted annually by Cornelius Griffin and his family and the church ladies in the kitchen.

Boyd doesn’t remember how it came about that he supplies the turnips and collards for the annual dinner. He probably volunteered because he is a part of the Griffins’ extended family. Or, perhaps, someone volunteered him because he is a master at growing greens. Either way,  the community Thanksgiving dinner is a holiday tradition for Boyd and one he looks forward to each year.

Because of concerns about the coronavirus, there will be no dining-in at Brundidge Station today. All the Thanksgiving meals will be delivered so the need for turnips and collards has been just as great. And, Robert Boyd has delivered.

“I came from a big family and we always has a big garden,” Boyd said. “My daddy planted the garden and I learned from him. We always planted turnips and collards and I’ve raised them ever since.”

Boyd grew up in the edge of Coffee County but, after he served three years in the Marine Corps that included boot camp at Parris Island, infantry training at Quantico and a tour of duty in Okinawa, Boyd came home to Alabama.

Boyd found employment with Wayne Farms and later moved to the Tarentum community and became the greens gardener for the Griffins’ community Thanksgiving dinners.

Boyd is quick to say that he is just one of many volunteers, those that prepare the food, the servers, those that deliver and those who do the many other tasks involved in serving 200 or more turkey dinners with all the trimmings.

“I just grow the greens,” he said. “If I had to say which greens I rather grow, I’d say collards. Insects can get in turnips and wipe them out. Insects don’t do collards like that and, too, collards have a longer growing season.”

As far as which he likes better at the dinner table, Boyd said it’s a toss-up.

Boyd gathers the greens for the big dinner with the help of Sister Sharon and others from Lily White Church and delivers a huge mess of greens to the cooks.

When the Thanksgiving dinner is served, Boyd is usually at work but that’s all right. He is thankful that he can contribute to making Thanksgiving more special and meaning for those who receive the meals and also those who prepare and deliver them.

That’s what Thanksgiving is all about, he said, a gathering of families and friends “and, of course, of the greens.”

Trojans fall to MTSU in Battle for the Palladium

The Troy Trojans fell to Middle Tennessee State 20-17 on Saturday in the Battle for the Palladium at Veterans Memorial... read more