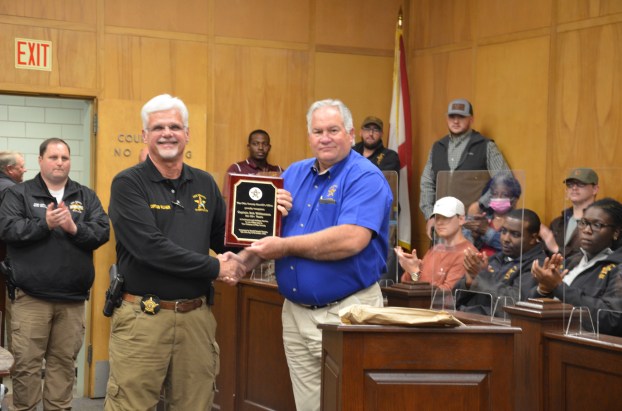 Capt. Bob Williamson, left, was honored by Pike County Sheriff Russell Thomas and other members of the sheriff’s department on Monday as Williamson retired after nearly 40 years of service to the department.

After almost 40 years of service in law enforcement, Capt. Bob Williamson celebrated his retirement with family, friends, and coworkers on Monday.

“It’s like losing a family member,” said Pike County Sheriff Russell Thomas. “We were both deputies together, and we’ve worked together ever since. There’s no one in the state of Alabama that’s better than him.”

“It’s difficult to retire because I’ve enjoyed my job so much. I’ve really enjoyed working in law enforcement,” Williamson said.

Williamson was born and raised in Troy and has plans to stay in the community he loves for the rest of his life. “It’s just a good town and a really good place to live. I like everything about Troy,” he said.

When deciding on a career path, Williamson explained that a couple of his friends talked him into entering the field of law enforcement.

In 1981 he started working for the Pike County Sheriff’s Office as a patrol officer. A few years later, Williamson was assigned to the narcotics task force where he worked as an investigator, and four years ago, he was promoted to captain.

Williamson worked at the same office his entire career, which he explained is unusual as most people transfer to a few different departments throughout their career.

Williamson said he loved helping people in the community with small and with large problems. He also enjoyed the investigation side of his job. “I liked working with my team and outsmarting those involved with criminal activities,” he said.

Thomas called Williamson was an important asset to the agency and to the citizens of Pike County.

“I’ll miss his work ethic. He was very disciplined, knowledgeable, and full of wisdom. You can’t put it into words or describe what a great job he’s done and how much he’ll be missed. He’s going to be difficult to replace,” Thomas said.