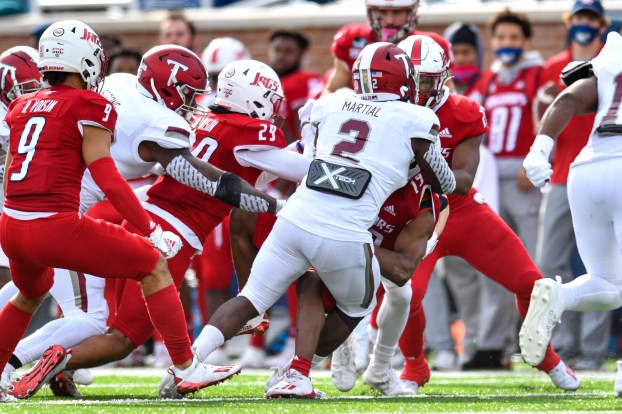 MOBILE, Ala. – The Troy defense was dominant in a shutout victory over South Alabama in the Drive Safe Alabama “Battle for the Belt” Saturday afternoon at Hancock Whitney Stadium in Sun Belt Conference action. Troy secured its third-straight victory over the Jaguars with a convincing 29-0 win, marking the first shutout in the rivalry’s nine-year history.

“We had a great week of practice,” head coach Chip Lindsey said. “First of all, we had the majority of our guys back this week and they did really good work this week Tuesday, Wednesday and Thursday. I told our team before the game today ‘I don’t know what’s going to happen today but I do know this, we’ve had as good of a week of practice as we’ve had in a long time and it paid off today.’ I thought we played a complete game, offense, defense and special team. There are a couple of things we have to correct but really proud with how our team played together and went out and got a big win.

Troy’s defense turned South Alabama over on downs four times and tallied two additional turnovers in the outing. The Trojans (5-4, 3-3 Sun Belt) combined for a season-high five sacks and held the Jaguars (4-7, 3-5) to 57 yards rushing, the third time this season Troy has held its opponent to under 100 yards on the ground.

Carlton Martial finished with a team-high 14 tackles, his third consecutive game with double-digit tackles, while T.J. Harris recorded a career-high nine tackles and notched his first-career interception. Antonio Showers recovered his second-career fumble after Richard Jibunor forced a strip-sack in the second quarter.

Troy quarterback Gunnar Watson finished an impressive 34-for-41 for 297 yards and three touchdowns while Kimani Vidal led the Trojan ground game with a 76-yard effort to go along with 29 receiving yards. Nine different Trojans tallied a reception in the win, led by Geiger’s seven receptions for 51 yards and Tray Eafford’s four receptions for 67 yards.

“I thought we had a really good, simple plan. We understood that we had to do our best to get the ball to our play makers. I thought Gunnar did an excellent job. He took what they gave us and took care of the football and obviously those two young running backs we’ve got are going to be really good in Kimani [Vidal] and Jamontez [Woods].”

After throwing an interception on a trick play on the opening drive, Troy struck first after Evan Legassey connected on a 22-yard field goal. Watson and the Trojan offense then went to work, scoring a touchdown on its next three drives.

The sophomore gunslinger found three different receivers for scores in the second quarter connecting with Khalil McClain (15 yards), Geiger (15 yards) and Eafford (21 yards) to give the Trojans a 24-0 advantage. Watson became the third Troy quarterback since 2015 to throw three touchdown passes in a quarter.

A 44-yard field goal with eight seconds left in the second quarter, Legassey’s second of the day, gave troy a commanding 27-0 lead at the half-way point. It was Troy’s eighth halftime lead in 10 games this season and marked the ninth time this season that the Trojans scored on its final possession heading into the half.

Both defenses flexed their muscles in the second half as the Trojans turned the Jaguars over on downs twice in the third quarter, while Troy came up shy on fourth-and-short inside the red zone on its first offensive possession of the half. Another promising Troy offensive drive ended without points after South Alabama blocked Legassey’s 33-yard attempt in the fourth quarter.

The second half’s only points came on special teams when Geiger blocked a punt for a safety, the senior’s first-career block.

South Alabama quarterback Desmond Trotter went 15-for-28 for 144 yards with an interception and a fumble. Jalen Tolbert finished as the Jaguars’ leading receiver with 92 yards on five receptions.

JONESBORO, Ark. – Jacob Free threw for the seventh most yards in school history and the Troy defense locked down... read more