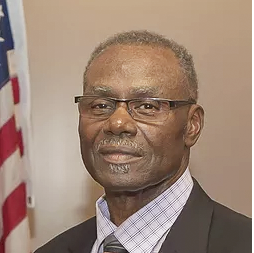 ‘He will be missed’: Pike County mourns the loss of longtime commissioner Charlie Harris

American Flags in Brundidge are flying at half-mast in memory of Charlie Harris, a lifetime resident of the city and a leader in city and county politics for 34 years.

At the time of his death on Thursday, Harris was serving District 5 on the Pike County Commission, a position that he had held since 1993.

“Commissioner Harris was on the Commission when I started in 1998,” Wilson said. “He truly loved serving the people of District 5 and was always willing to fight for what he believed in. Here, at the Commission Office, we consider ourselves a family, and it is a sad day to have lost one of our own.”

Commissioners Robin Sullivan, Homer Wright and Jimmy Barron have all served on the commission with Harris for 16 years.

To a one, they said Harris was a man of his word and a dedicated public servant.

Sullivan said what he appreciated most about Harris was that, once he gave his word, he kept it. “And, you could count on it.”

“Charlie and I have covered a lot of important ground and issues over these many years,” Jones said. “We could always talk and we had a close relationship as well.”

Jones said he enjoys debating the pros and cons on many topics and debating with Harris was especially enjoyable.

“Charlie would always listen and be open-minded with me, even though he didn’t always agree,” Jones said. “I respected him for fighting for his ideas. Almost always, we would get a plan worked out and that’s to his credit for trusting in me and my advice.”

Allen said, once Harris made a decision he was a good as his word.

“You could rely on his word and take it to the bank,” Allen said. “Charlie kept his word. That’s very important for us all to remember about him.

“Charlie Harris was good man and a commissioner who truly loved Pike County and the commission itself. He served his district and Pike County for these many years and he took pride in his important role to all citizens. I will miss him.”

Harris political career began in his hometown of Brundidge in the late 1970s when he ran for the Brundidge City Commission.

“Charlie ran several times unsuccessfully,” said Jimmy Ramage who was, at that time, a city commissioner. “He and Jerry Henderson led the efforts to get the Brundidge and Troy forms of city government changed from the city commission to the mayor-council form. They were successful and, in 1986, Charlie was elected to represent his district.”

Ramage said the transition in government went smoothly and allowed  for better representation in city government.

Isabell Boyd, who now serves the City of Brundidge as its mayor, served, with Harris on the council in Brundidge.

“I enjoyed working with Charlie,” Boyd said. “He was instrumental in getting our form of government changed and in making positive changes in Brundidge. He will be missed. The flags are flying in recognition of his longtime public service.”

By Lauren Johnson Health care specialists have said the past three weeks have been the worst yet for the spread... read more