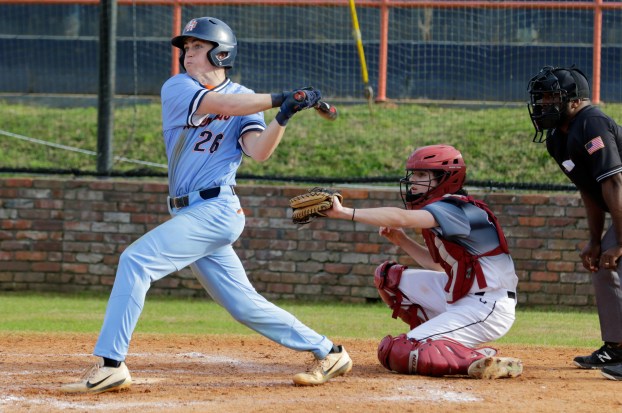 Photo/Dan Smith J.B. Sanders had one hit against Prattville plus two hits and an RBI here against Shelby County Friday at Hogan’s Hole in Troy

The Trojans of Charles Henderson High hosted Prattville High and Shelby County Friday in the second day of the Terry Sikes Invitational Tournament, dropping the first game to the Lions 12-1, and also coming up short in the second game against Shelby County 7-3.

The final day of the Sikes Invitational is Saturday, with CHHS scheduled to play Lee at 5 p.m. at Troy University.

In the first game Friday against Prattville, the Trojans could manage only four hits over six innings, as Bailey Sparrow, J.B. Sanders, Damian Hart and Tyler Martin had one hit apiece.

Brady Huner got the start on the mound for CHHS, working 2 1/3 innings, with Ben Reeves pitching through the fifth inning and Dalton Stephens finishing out the top of the sixth.

CHHS got its only run in the bottom of the fifth when Tyler Martin doubled and scored on a single by Sanders.

John Payne got a complete-game victory for Prattville, allowing one run on four hits while striking out six in the contest that was halted after six innings due to the 10-run rule.

In the second game Shelby County took a 4-0 lead, scoring one in the first and three in the second, but the Trojans rallied to cut the lead to 4-3 with three in the bottom of the fourth innings.

Darryl Lee started off the rally in the bottom of the fourth with a single, Reeves singled, Sanders doubled to drive in a run, Reeves scored on a wild pitch, and Sanders scored on a sacrifice by Will Templin.

The Wildcats extended their lead to 5-4 in the fifth inning and added two more in the top of the sixth en route to the 7-3 win over the Trojans.

Sanders had two hits at the plate for the Trojans while Sparrow, Lee and Reeves had one hit apiece.

Lee got the start on the mound for the Trojans, working 5 1/3 innings, with Sanders pitching the final 1 2/3 innings.

The Trojans play Lee at 5 p.m. on Saturday at Troy’s Riddle-Pace Field to close out the annual Terry Sikes Invitational Tournament.