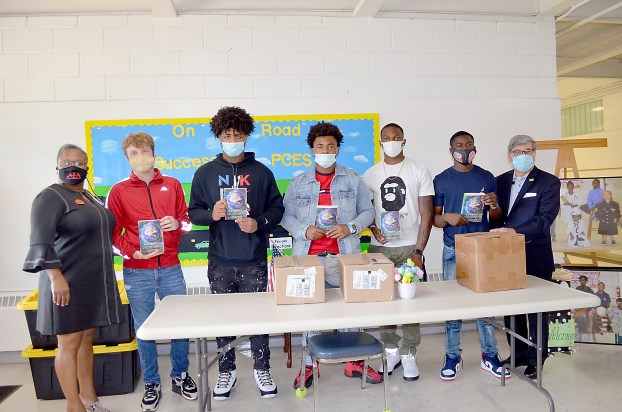 Third grade students at Banks Primary and Pike County Elementary schools received a gift from the Brundidge Rotarians this week. The gift of words.

Rotarian Jimmy Ramage said the Rotary Dictionary Project is a nationwide effort to provide young students with their own personal dictionaries.

The Rotary Dictionary Project began in 1995 and the Brundidge Rotary Club came on board soon after and began gifting third graders in the schools at Brundidge, Banks, Goshen and Pike Liberal Arts School with the personal dictionaries.

Ramage said, because of COVID-19, the Rotary Club’s fundraising events have been limited and there was some concern as to how this year’s dictionary project would be funded.

However, an anonymous Brundidge Rotarian generously funded the project.

So, more than 200 student dictionaries have been donated to third grade students in the four schools this school year.

“The dictionaries expand the knowledge of these young students by exercising their minds and broadening their horizons,” Busbee said. “And, there is more included in the dictionaries than definitions. There are the metric and measurement systems, Roman numerals, a world atlas, cursive letters and more. Each dictionary is a one-stop shop for a lot of things.”

“Our students at PCES are excited to receive the dictionaries each year,” Arnold said. “To have a book in hand that provides immediate information including the spelling, pronunciation and definition of words is a tremendous learning aid.”

Rouse agreed that a dictionary is a valuable tool for learning and one that every student can benefit from having for use at school and home.