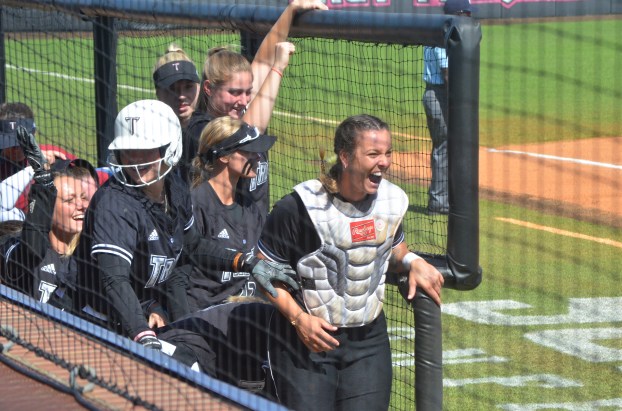 Mike Hensley | The Messenger The Trojans celebrate after a Kelly Horne home run on Thursday afternoon in Troy.

Trojans stave off elimination with win over ULM

Audra Thompson had a big three-run double in Troy’s 5-1 win over the ULM Warhawks on day two of the Sun Belt Conference Tournament at the Troy Softball Complex.

After falling to UT Arlington on day one, the Trojans were need of a win to keep their season alive. Along with Thompson’s three RBI, the Trojans also had a two-run home run by Kelly Horne, giving the Trojans an early 2-0 lead.

Thompson’s three RBI came on one swing of the bat when the cleared the bases with a double that banged off the wall in center field, allowing Anslee finch, Horne and Katie Webb to score, extending Troy’s lead to four at 5-1.

Thompson finished the afternoon 2-4 at the plate to go along with her three RBI. The Trojans also had two hit days by Katelynn De Leon, Horne and Webb.

Leanna Johnson held the Warhawks to just one unearned run inside the pitching circle. She pitched all seven innings for the Trojans and allowed three hits and three walks. She finished with two strikeouts.

The Trojans will take on UT Arlington in an elimination game on Friday beginning at 12:30 p.m. it will be a rematch of Wednesday’s game; a game the Trojans lost 2-1 in eight innings.

If you have enough gas in you car to make it through the weekend, you don’t need any more. That’s... read more