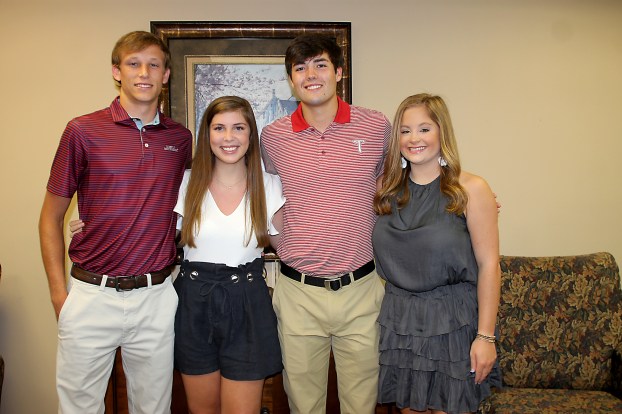 The Troy Exchange Club has selected the winners of the 30th annual J.O. “Tip” Colley Award.

Jerry Miller, who coordinates the scholarship awards for the Exchange Club, said students from all area schools are invited to apply for the scholarship. The Colley Award is for Christian, students athletes, but requires students to have a well rounded background in academics, athletics, extracurricular and community activities. Each year the Exchange Club selects a male and female for the annual Colley Award as well as a male and female runner-up.

Renfroe said winning the scholarship was a special moment for him.

“It’s a real honor to win the award,” Renfroe said. “I’ve had family members who have won the Colley Scholarship. My dad and cousin both won it. I worked hard trying to live up to their expectations and without their support I wouldn’t have been able to win this award.”

Shaver said she was honored to receive the scholarship because she was aware of how many deserving female, Christian athletes there were in the county and how hard they worked.

“It’s just an honor to be nominated,” Shaver said. “To win it is something very special. There’s no shortage of young women that are committed to their community and make an investment that makes a difference in their community.”

Snyder said a lot of great athletes have been awarded the scholarship in the past and it was an honor to receive the nomination.

“It was an honor to receive the nomination,” Snyder said. “A lot of great people have been nominated before me, and I want to be able to live up to their standards.”

Garrott said being considered for the Colley Award was an honor in itself.

“It’s an honor to just apply,” Garrott said. “We live in a community where a lot of people give a lot back to the community and this scholarship gives young people an opportunity to further their education.”