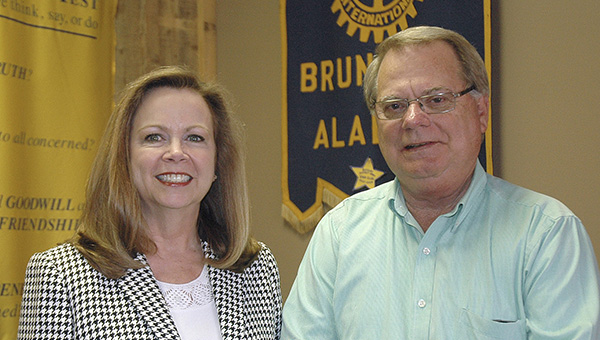 Troy Cable Special Projects Director Jimmy Copeland was the program guest of Sandy Boutwell at a meeting of the Brundidge Rotary Club in this 2014 file photo.

Jimmy Copeland passes away at the age of 69

The death of Jimmy Copeland of Troy on July 26, 2021 brought a wave of sadness to all who knew him.

Copeland was a devoted family man, a friend to all and a longtime and dedicated community servant. He will be missed throughout the Pike County community, said Troy Mayor Jason A. Reeves.

“Jimmy Copeland served Pike County in many and different ways that will continue to benefit all county residents in the coming years,” Reeves said.

“He was elected to the Pike County Commission District 2 in 1989 but his term was interrupted when he was deployed to Desert Storm with the Alabama National Guard.”

Copeland served in Operation Desert Storm from September 1990 to June of 1991. During that time, his wife, Martha, served in his seat on the commission.

During Copeland’s service on the Pike County Commission, he contributed to the welfare of all citizens of Pike County, Reeves said.

As a Pike County Commissioner, Copeland was a part of many decisions that brought business and industrial growth to the county.

“Jimmy was involved in the community in many ways,” Reeves said. “He was a member of the Pike County Chamber of Commerce and was a past chair of that. Any way that Jimmy could be of service, he was willing.

“Through his relationship with Troy Cable, Jimmy was a big player in the growth of that business and in dealing with government regulations and support, with broadband and with related grants. He was key to all that and was a positive influence throughout the county,” Reeves said.

Reeves remembers Copeland as a dad and baseball coach.

“But, more than anything, I remember him as a family man,” he said. “Jimmy will be greatly missed. Our thoughts and prayers are with his family.”

Former Brundidge Mayor Jimmy Ramage also said his prayers are with the family.

“Pike County has lost a devoted member of the community,” Ramage said. “Jimmy Copeland was liked and respected as a man, as a member of the Pike County Commission where he was involved in county wide industrial growth and through-out the county.

“He was interested in seeing that all Pike County prospered. As a county commissioner, he was instrumental in securing outside financing for our area regarding the expansion of Carter Brothers Manufacturing at Hamilton Crossroads and the Walmart DC project in Brundidge. State and federal dollars were involved with both projects.”

Ramage said both projects provided jobs for local and area residents and dollars that turned over several times locally.

As much as Jimmy Copeland will be missed by the Pike County community, even more will he be missed by his family.

His grandson, Max Copeland, remembers his granddad being the happiest when he was with family.

“Grandy had two sons, my dad, Chad, and Todd, and all of us grandchildren,” Max said. “We all enjoy the beach but he didn’t, but still he wanted to share that time with us, so, he bought a beach house so he would have a place to stay where he could be around us while we enjoyed the beach.”

Max said there is no doubt in his mind as to how much he, his brother and sisters and cousins were loved by their granddad.

“We were all the world to Grandy and he would follow us around the world to be a part of all the things that we were doing,” Max said. “Grandy would always drop whatever he was doing to spend time with the folks he loved. That’s what stands out the most to me about our granddad. We love him and we will miss him, always.”

Rep. Mike Jones, R-Andalusia, is on the campaign trail letting people know he is seeking the Republican nomination to replace... read more