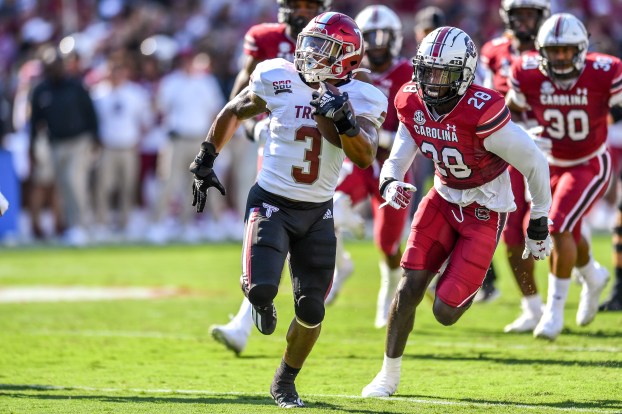 Trojan ground attack takes a step in the right direction

The Troy Trojans entered Saturday’s game against South Carolina struggling in the run game. They took a step in the right direction on Saturday when they rushed for 155 yards in their 23-14 loss to the Gamecocks.

Troy’s 155 rushing yards was the most since their week one win over Southern when they finished with 164 rushing yards. The Trojans ground attack averaged 4.8 yards per carry on Saturday, the highest so far this season.

“I do like the way we ran the football,” head coach Chip Lindsey said. “We were better up front than we’ve been the last couple of weeks.”

The Trojans had their first 100-yard rusher of the season in senior B.J. Smith. He finished the game with 102 yards on 19 carries and had one touchdown.

“During the game I had a smile on my face watching him (Smith) run,” Lindsey said. “All that kid has been through to fight to get back. He got back somewhat healthy and got banged up again. It was good for it to pay back and for him to get over 100 yards rushing. I was really pleased with his performance. We need him to continue that, especially with Kimani (Vidal) being down.”

Smith took the place of Vidal, who was out Saturday due to injury. Smith’s 102 yards made him just the 12th Trojan to rush for 2,000 yards during his career.

“It’s a blessing for sure,” Smith said. “Troy has a rich history. Just to be mentioned with those great names on that list is definitely a blessing. That’s a very big accomplishment.”

Vidal leads the Trojans ground attack with 224 yards with Smith following close behind with 184 yards.

After missing Saturday, there is hope that Vidal will return to action this week.

“We are hoping to get him back this week,” Lindsey said. “It’s going to be a day-to-day thing with him. He is working hard in rehab, trying to get himself healthy.”

The Trojans and Eagles will kick things off on Saturday beginning at 6 p.m. at Veterans Memorial Stadium.